Having baked over 100 pizzas and had the Gozney Roccbox for over 18 months, I thought it was a good time to share my experience with this home pizza oven. 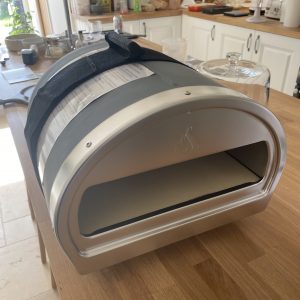 The Gozney Roccbox is a very well-built, high-quality pizza oven. It’s definitely in a competitive market, but Gozney have been making commercial pizza ovens for a long time, and their expertise shines through in this smaller model suitable for home use.

Opening the box was a good experience; you can tell it’s a quality product. All the parts were packaged well, and I knew I was on my way to making a good pizza. There is also no complicated assembly to go through, which I did appreciate. I had started with just the propane burner as the fuel source, and this comes in the box, so you really have everything you need to get started from the get-go. As long as you’ve got some dough, san Marzano tomatoes and mozzarella, you can make perfect pizzas right out of the box.

Once I had it set up on a table, I turned the gas on and waited for it to heat up to temperature. The temperature gauge reads the bottom of the stone, giving a more accurate value of the heat distribution. The top of the stone cools very quickly when the pizza is added, and you want to have a consistent cooking surface for the best pizza so let the oven get into the orange zone before starting to cook. Even without the smoke from wood burning, I noticed a lot of build-up of soot on the oven opening after the first cook. This isn’t anything to be worried about and does clean off but be careful you do it when the pizza oven has cooled down.

I don’t have an outdoor kitchen, so I needed to go inside to prepare the pizza for cooking. Plain margarita was the first pizza I attempted. Once the interior temperature was over 400oC, I placed the pizza into the oven and kept it on high heat. Something to note is that the Gozney Roccbox pizza oven can get up to very high temperatures with the gas burner, which is so important for cooking a delicious pizza with a good crust.

Before buying the Roccbox, I did a lot of research into the Ooni Koda, and I’m pleased with my decision, but the pizzas do come out a little smaller. These are two of the best outdoor pizza ovens on the market, but a few small differences made the Roccbox the right fit for me.

I prefer that the pizza stone is thicker in the Gozney Roccbox pizza oven as it can hold the heat required to cook the bottom of the pizza evenly and also makes cooking multiple pizzas one after the other possible. Personally, I also quite like the design and colour choices. They now offer the Roccbox pizza oven with a dark olive green silicone skin which looks great!

They both come with a placement pizza peel, and both Ooni and Gozney offer different solutions for the pizza turning peel.

On face value, if you’re looking to make some 16-inch pizzas, then by this point, you’ll be leaning towards the Ooni. The main consideration to make here is what you think you’ll be making more often. The oven chamber is large enough to cook pizzas up to around 12 inches which is generally enough for one person, but you probably wouldn’t share.

This oven does make great outdoor pizza and gives you portable pizza with a well-designed velcro hand strap design to go around the oven body. If you travel, it’s a compact outdoor pizza oven that would fit easily in the boot of a car for a road trip or even just over to a friend’s house. Just be aware that it is quite heavy with the thicker stone, so whilst it is still a portable pizza oven, you do need to have the ability to lift it carefully.

For me, the flexibility offered by having the Wood Burner 2.0 for the Roccbox makes this a no-brainer. The burner is easily removed and swapped from the gas burner to the wood burner, turning it into a wood-fired oven.

I was very excited to try this before buying, I can’t fault the build quality here, but it can be more difficult to time the cooking. You really need to load the fire up and get a roaring flame from the wood burner right as you place the prepared pizza dough into the oven. I’ve found that if you can get someone to watch the fire and internal temperature whilst you do the pizza prep, you really get the best of both worlds.

The slightly oak smoky flavour that comes from the wood burner attachment is similar to that of a traditional oven. Using the wood burner also means you can get away without using a propane tank, which can be awkward to travel with and even use in some parts of the world.

Out of the box, the Gozney Roccbox doesn’t come with the turning peel. However, it does come with a placement peel. I managed okay with just the placement peel for the first six months and would slide it under and turn the cooking pizza with my fingers (quickly so you don’t burn yourself) and then slide it back into the oven. So it’s not essential, but I found that by sliding it under regularly, the bottom of the pizza was in contact with the stone less, so I would get varying results and did have occasions where the pizza was cooked on top, but the bottom of the dough wasn’t cooked through.

The turning peel itself is quite well built, as you would expect from Gozney and for the price.

Should you buy the Roccbox Pizza Oven

There are a lot of challenges when it comes to making homemade pizza or pie, so I’ve found it useful to try a few different dough recipes and find what works best for you. You might prefer wood fired, but for me, the ease of the gas burner makes it more accessible and has meant that I’ve used the oven multiple times per week. I love pizza and had wanted a pizza oven for a little while and have to give the Gozney a five star rating. I now have a home oven and make pizza better than most restaurants offer from the comfort of my own home.